It's Finals time in the Belief Sports Elite NTS

Twenty-eight squads will be heading to Billesley Common, home of Birmingham Moseley - one of England's most historic rugby clubs - to take part in England Touch's showpiece occasion for mixed club teams.

The teams' performances in Rounds 1 and 2 in Nottingham and London have seen them be ranked and then seeded into their respective competitions. 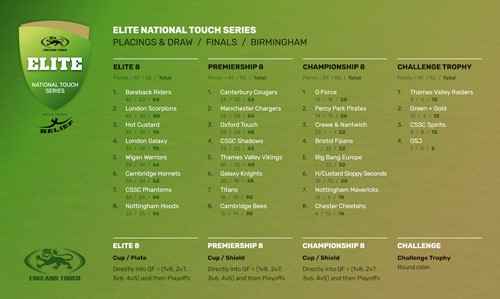 The Elite 8, Premiership 8 and Championship 8 will go straight into a knockout format with a quarter final, semi-final and final all happening on the one day. Meanwhile the Challenge Trophy will be a round-robin format so that all teams are guaranteed three matches.

As with Rounds 1 and 2 all matches will be 40 minutes long (two 20-minute halves plus a five-minute half-time), but drop-off extra time will be in effect in all of the knockout competitions.

England Touch will be live streaming the day right here on our main website!