Hot Custard reached their second Cup semi-final of 2018, too, but there was plenty of movement elsewhere during a weekend which showcased how evenly matched many of the clubs are.

In the Premiership competition there was silverware for Bristol Fijians in the Cup, while Guildford's G:Force continued their stellar rise by backing up their Championship Cup success in Nottingham with the Premiership Plate this time around.

The final winners of the weekend were Hot Custard Sloppy Seconds, who overcame Chester Cheetahs in the Championship Cup final, going one better than their Nottingham exploits in the process.

Finals Day takes over Billesley Common, home of Birmingham Moseley - one of England's most historic rugby clubs, on Saturday, May 12th.

This will be followed by the Belief Sports Elite NTS After-Party. Tickets are available for £5 via www.englandtouch.org.uk/membership (log into your account and choose the event from the dropdown menu) or by emailing Zoe via events@englandtouch.org.uk

These tickets will come off sale on May 6th. 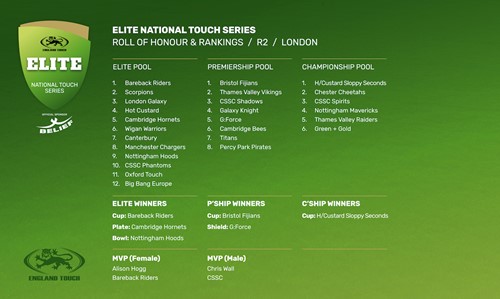