The purpose of this policy is to ensure a fair and equitable process is undertaken for the selection of England Touch representative teams.

This selection policy consists of three sections. The first section states the England Touch High Performance vision and values. The second section defines the application of the policy. The third and final section details the player selection policy under the following headings:

It is the aim for England Touch’s High Performance programs to engage the most talented and well-rounded individuals to represent England’s qualities, ethos and performance standards at International events 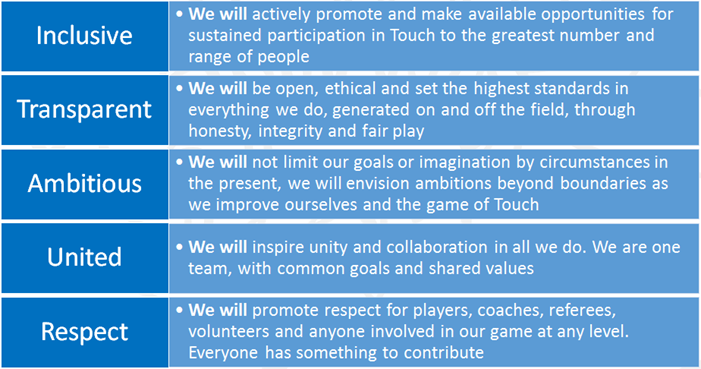 This policy outlines the guidelines that will be in place for the selection of all England squads or teams. Merit teams will not be selected in any divisions.

This policy should be used as a starting point for selection of all England representative teams, as it will ensure the selection process is consistent at all levels and is not compromised in any way.

Throughout all, an England perspective should be applied to all selections. With this in mind players selected to represent an England team/squad will be selected in the divisional team/squad that England Touch, through the High Performance Program, deems best meets the needs of England i.e. players who make themselves available for England selection may be selected in any team they are eligible for.

Where a player has been selected in an England team and subsequently withdraws from that team with a valid excuse, such player shall be deemed ineligible for selection in any other England team for that tournament/series.

Where a player has been selected in an England team and subsequently withdraws from that team without a valid excuse, such player shall be deemed ineligible for selection in any other England team for that tournament/series and, shall show cause why they should be considered for any further England team in the future.

To identify players with the skills and attributes to be excellent open level touch players and representative ambassadors for England Touch.

To identify potential future open players already playing touch and monitor their progress with a view to inclusion in the relevant HPTS.

To monitor players currently in the HPTS.

Players who wish to be considered for England selection shall be required to be TID’d in at least one of the following, noting that the England Touch Nationals event is the primary event for selection purposes and athletes are strongly encouraged to be at this forum. The other events are considered secondary events for TID purposes.

Players will be assessed using the England Touch Talent Identification Assessment Form. The comments section is for information gained from the player and/or their coach that may be relevant e.g. goals, attitude, maturity, experience, response to training, etc.

Assessment is based on four main areas: physiological, core skills, game play and psychological. These factors are rated according to the standard seen at the specific event, not as a comparison between events.

This information forms the basis for discussion about individual players when reviewing the current and potential players in the England squads/teams.

Players can be selected across age divisions. However, players can only be selected from a division regarded to be of a higher standard if those players are eligible. For example, if a player is eligible for the Men’s 35s division and is playing in the Men’s 30s, then he can be considered for the Men’s 35s team. This does not apply to Youth players who may be deemed to be suitable for an open division but who have never have played at the open level.

Eligible players will automatically be considered for other divisional squads/teams.

Injury or illness during selection events

Players should in most cases, participate in the designated selection event/s. However, consideration may be given to a player who suffers an injury or illness or has extenuating circumstances prior to and/or during the event/s. If the player is not actively participating, requests for consideration of an exemption must be put in writing and sent to the England Touch High Performance Director prior to the event/s.

Each exemption request will be assessed on a case-by-case basis. A late exemption will only be considered for a player who suffers an injury or illness past the deadline and prior to the event.

Notification of player injury, illness or extenuating circumstances at an event is the responsibility of the player concerned. This must be in writing and sent to the England Touch High Performance Director (or High Performance Panel in absence of HPD).

The following process for selection into HPTS will take place from 2017:

HPTS members (where possible) will train together in either the Opens or Youth divisions. Seniors/Masters may use an alternative method approved by the High Performance Panel.  Training can be either weekly or camp based. Members of a HPTS will also be required to comply with attendance at required meetings or workshops.

Admission to the HPTS

Exclusion from the HTPS

Behaviour both on and off the field (i.e. social media) will be taken into consideration when determining the selection of National squads/teams. This includes, but is not limited to, the following behaviours:

Should a player be involved in any such situation, they may become unavailable for selection to represent England. Players will however be given the opportunity to state their case in writing to the England Touch High Performance Director and/or High Performance Panel.

Team selection will occur in the following order:

Touring Teams (TT) will be made up of 16 players selected from the HPTS.

If once the TT is selected and a player has to withdraw a member of the HPTS will be called upon to fill the position.

Touring Teams will be based on the best-performing players according to the selection criteria outlined by the appointed coach of the division for the makeup of their respective team. Factors including team unity and cohesion will also be taken into account.

The best team determined by the Head Coach for that division will be selected, as opposed to the best-performed individual players, subject to performance.

All of the England teams shall be announced via the England Touch website when all teams are finalized and until that time, strict confidentiality applies to all involved in the process.

Upon announcement of the teams all selected players shall, within the communicated timeframe, be required to confirm their availability to serve as final confirmation of selection.

Shadow players: all members of the HPTS not originally selected in the final touring team will effectively be shadow players. These players will be advised in writing.

Junior and Youth teams and squads

England Touch Youth team or squads can be selected in male and female under 15s and 18s squads. These players will be selected through the process outlined in the England Touch Talent Identification Program.

This relates to the positional, skill and team related criteria for the team to be selected. The Head Coach will advise all HPTS members of their intentions around the TT composition as early as possible, if appointed at the time.

A panel consisting of the High Performance Director, a member of England Touch High Performance Team, and one other neutral person shall to be established to facilitate and manage all selection disputes and or dispensation requests.

Injured or unfit players may be replaced at any time, up to the commencement of the International event.

The Head Coach for affected team, in consultation with the England Touch High Performance Panel, will then decide upon replacement players.

Before any player replaces a selected player, the Head Coach of the affected team(s) may reconsider reshuffling the composition of the team.

Should a player withdraw from an England team the replacement method shall follow the process below:

Should a player withdraw from the initial squad the replacement method shall follow the process below:

England Touch takes a lead on equality, diversity and inclusion

A week of interviews with the world's best